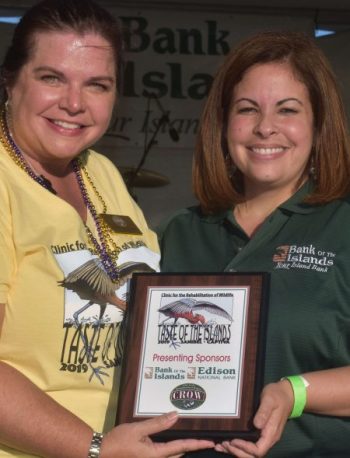 Taste of the Islands Winners Announced

The Clinic for the Rehabilitation of Wildlife (CROW) announced the winners of the 38th Taste of the Islands to a full Sanibel Community Park on Sunday. For the tenth year in a row, Bank of the Islands/Edison National Bank returned as the Presenting Sponsor of the event.

“We are incredibly thankful for the team at Bank of the Islands/Edison National Bank for all of their help before, during and after the event,” says Alison Charney Hussey, executive director for CROW. “They play an integral role in creating a fantastic community event that is fun for everyone involved while supporting CROW and our work to save local wildlife.”

This year’s event featured 13 restaurants from Sanibel and Captiva.  Judges Chef Jarred Harris, Gina Birch, Artis Henderson and Karen Feldman voted on a variety of categories while attendees voted for the ‘People’s Choice’ award sponsored by Rosier Insurance. The Presenting Sponsor of the event was Bank of the Islands/Edison National Bank.

Taste of the Islands Winners:

In an unprecedented twist, the judges voted to a tie in the ‘Best Seafood’ category and both restaurants were awarded the honor. In a “three-peat”, The Clam Shack was voted the ‘People’s Choice’ joining the other multi-year winners Lazy Flamingo, who won from 1998-2000, and Gramma Dot’s, who won eight straight awards from 2001-2008.

“It was great to see the community come together for CROW’s 38th Taste of the Islands. The weather was fantastic, the food was amazing, and everyone enjoyed the live entertainment provided by the Private Stock Band featuring Trey Wanvig,” said Debra Neri, event chair. “Thank you to everyone who attended and supported CROW’s mission, especially the participating restaurants, sponsors and volunteers who made it all possible.”

The 38th Taste of the Islands was well attended with over 3,000 attendees. Funds raised though the event will benefit CROW’s mission to save wildlife through state-of-the-art veterinary care, research, education and conservation medicine.